Google’s foray into health care goes live this week. Well, maybe not so much live, but it’s the permanent beta that Google is famous for.

Google Health is not like WebMD or other health Web sites.

It’s a place to keep all your medical information in one area. Site users enter all their health information into their profiles and the site alerts users to drug interactions and gives other helpful news. You can even upload your medical records.

The site is more of a medical portal than an Internet doctor’s office, which is good because that’s what Google does well. It has an index of medical Web sites and will help you locate the right doctor for you once it has all your info.

A baseball cap that reads your mind 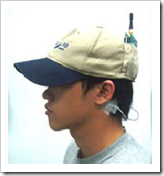 It looks like an ordinary baseball cap. But when you put it on, the cap detects and analyses the electroencephalogram (EEG) signals from your brain. It can even tell you if you’re getting too sleepy when driving based on your brain wave patterns.

Similar technology could also allow you to control home electronics such as TVs, computers, and air conditioners, all by just thinking about them.

We’ve seen this stuff before, but there seems to be more of it bubbling up to the surface lately.

The underlying notion is great and certainly one of the holy technology grails is to find a way to effortlessly control our surroundings, but the real innovation is still a couple of innovations down the track from this one, when we can take off the cap and control our immediate world through something less obtrusive and less fashion oriented.

Wearing a cap is not the end of the world, but is this technology going to make it into mainstream usage if we all have to don a cap to make our computers work, check our blood pressure or boil the kettle?

My guess is that RFID, devices we carry in our pockets or sewn into our intelligent clothing, or simply our voice coupled to ubiquitous computing devices will play more of a role in providing the future drivers of this.

A study at the University of Liverpool has revealed that entrepreneurs are driven to start companies by their passion for ideas rather than the pursuit of wealth.

Researchers who asked entrepreneurs and small business leaders about their motivations for achieving business success found that only 6.9% were driven by financial reward.

Those surveyed cited a ‘lack of money to invest’ and the ‘fear of failure’ as barriers to starting up a business.

The survey was conducted by VentureNavigator – a state-of-the-art online service based at the University of Liverpool designed to help start-ups and small businesses improve their chances of success.

The research found the greatest motivator for entrepreneurs is passion about new ideas with 41.4 per cent of those surveyed citing this as their prime motivation for starting a business. 39.7 per cent were primarily driven by ‘wanting to be their own boss’.

To quote the wise one – Homer Simpson: derrrrr!

The vast majority of successful businesses (including Google, Microsoft and most others) I have ever come across were founded on a burning all consuming desire to bring to life an inner business demon that has possessed the entrepreneur.

Reward for effort is certainly important and greases the path ahead, but its main purpose is validation and an impetus to continue.

The overused and oft abused term “passion” is the bio fuel of choice by great entrepreneurs around the world.

As US technology giants including Google place a multi-billion dollar bet on WiMAX, backers of the wireless data-streaming format say it will radically change mobile Internet use.

A WiMAX network of the kind to be deployed across the United States by a joint venture dubbed Clearwire may render cable or phone line Internet obsolete and set the stage for free Google mobile telephones supported by advertising.

“It is like mobile Internet in your pocket,” said Scenna Pabesh, a spokeswoman for nonprofit WiMAX Forum, an industry group that promotes interoperability of networks and devices using the format.

“Anything you could imagine doing in your office or on a hefty Internet connection at home you are going to be able to do on the go.”

WiMAX is deployed in 110 countries and Wednesday’s unveiling of Clearwire should ensure the United States joins those ranks, according to Pabesh.

The Asian Pacific region leads in WiMAX adoption. South Korea is considered a “success model” with 150,000 people, most of them in Seoul, subscribing to WiMAX mobile services, she said.

WiMAX quickly moves large amounts of digital data such as video or picture files across kilometres, as compared to Wi-Fi connections available in cyber cafes or other “hot spots” where signals reach a few hundred meters or less.

“It is really Wi-Fi on steroids, but the trick is getting it rolled out,” Silicon Valley analyst Rob Enderle told AFP.

Leave your mark on the moon

You may never make it to the moon in person, but you can send your name there.

The Send Your Name to the Moon Web site enables everyone to participate in the lunar adventure and place their names in orbit around the moon for years to come. Participants can submit their information at http://lro.jhuapl.edu/NameToMoon/ , print a certificate and have their name entered into a database. The database will be placed on a microchip that will be integrated onto the spacecraft. The deadline for submitting names is June 27, 2008.

“Everyone who sends their name to the moon, like I’m doing, becomes part of the next wave of lunar explorers,” said Cathy Peddie, deputy project manager for LRO at NASA’s Goddard Space Flight Centre in Greenbelt, MD. “The LRO mission is the first step in NASA’s plans to return humans to the moon by 2020, and your name can reach there first. How cool is that?”