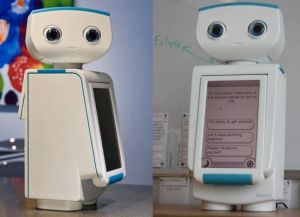 This weeks radio segment kicked off with a discussion about the $200 million Apple is rumoured to have just coughed up to buy an app called SIRI.

Although SIRI has only been around for a few months, and is currently only available in the US app store, Apple are hoping that this voice activated app that works like your own PA by listening to you, figuring out what you want, finding the right app to deliver on it and the instructing it to do what you want – like finding you a taxi, booking you a seat at the theatre, ordering your coffee to be picked up – is a game changer and one that will help them take on Google.

Phil, Adelaine and I agree, for once, that this might be an app worth having and I think we almost got Phil Whelan on RTHK3 Hong Kong radio to agree (not).

We then went on to chat about the death of the 3.5 inch floppy; a robotic diet coach called Autom and of course the big story of the tech week HP buys Palm – gee I hope HP uses it for niceness and not evilness..

Listen to this segment now, or listen live each Friday at 11.30 a.m. (Aust EST) and join me on Twitter for in between news and views from the future.

Spammers made $218 million dollars last year, but who really knows? This kick started my weekly on air discussion with Phil and Adelaine on ABC Radio Australia’s Breakfast program and Phil Whelan on Radio HK3 Hong Kong, before we turned our attention to satellites issuing speeding tickets from space and internet connected t-shirts.

Listen to this segment now, or listen each Friday at 11.30 a.m. (Aust EST) and join me on Twitter for in between news and views from the future.

Is this an iPad killer?

The WePad is shaping up to the be the most interesting of the iPad competitors. First off, it has all those things that some people are knocking the iPad for leaving out, like USB, an SD slot, (true) multitasking, Flash, and Adobe AIR. It’s got good-looking hardware too, but what might be a surprising selling point is the Linux-based operating system. And it also brings tech enthusiasts what everyone has been wanting all along, an Android vs. iPhone tablet battle!

In the video below the user is able to plug a mouse into the USB slot on the device. Super useful? Not one bit, but it does show the versatility of the WePad as well as some of the potential it has for the future. The grid-based UI might not be for everyone, but personally I think it looks quite good. Maybe a bit more technical than some people are looking for from their tablet, but just the sort of thing for geekier users.

Is nothing immune from the 3D craze?

The American government has embedded a 3D strip into their new $100 note in an attempt to head off counterfeiting, take a look (and no you don’t need your 3D glasses)…

Picking up the discussion with Phil Whelan on Radio HK3 Hong Kong we worked our way around the do’s and dont’s of online security, the proliferation of on-line spam (complete with a peek into Phil’s junk mail folder) and where, why and how spam comes from.

Next up were Robots, with a recent census claiming that there are 8.2 million robots in the world (is that all?) and then out to space with President Obama’s announcement to get to Mars some time around 2030 and NASA’s more imminent announcement that this September NASA will put a humanoid robot into space with the Shuttle team and over the next 15 years increase the Robots capabilities and workload until they are a fully functioning independent team member.

As always the word of the week, lot’s of fun and conversation and the song of the week (which I have left in) is a great rendition of Waltzing Matilda in a native Aboriginal language.

Listen to this segment now, or listen each Friday at 11.30 a.m. (Aust EST) and join me on Twitter for in between news and views from the future.

It’s raining iPad’s and in my segment this week, with Phil and Adelaine of ABC Australia’s Today programme, we start off with the in-studio debate of “will we or won’t we” buy the iPad and despite previous protests, nearly all the on air and production team are now convinced they will buy the new beast within the next 12 months.

Really interesting ‘cos a relatively new and untested device in a relatively new and unsought after product category is winning the hearts and minds of people and starting to become a “must have” device, when all before it has failed; and even Rupert Murdoch claims this little device may single handedly “save the newspaper industry”. That’s a lot of pressure for one piece of tech and as usual Hong Kong Radio Phil doesn’t agree with the hype and is waiting impatiently for the iPad storm to pass over.

From the sublime to the ridiculous the Mexican Government is set to cancel 30 million mobile phone connection of people who haven’t registered their phone ownership details with the government. Why – because they can – no really because it’s part of a crackdown on organised crime who are using their mobiles as an integral part of their drug trafficking and express kidnapping of taxi passengers in order to force them to pay ransoms and withdraw money form ATM’s – it is definitely a noble cause but is the cancellation of mobile phones going to stop this? I hope so, but I really really doubt it.

The word of the week, song of the week, competitions and even a guest appearance from my daughter as a music critic are just part of the frivolity that is this weeks FutureTech segment.