TASMANIA’S key tourism body has slammed the State Government for failing to provide adequate funding to promote the industry.

Mr Currant was speaking to more than 350 tourism operators at the seventh annual Tasmanian Tourism Conference, being held at the Country Club in Launceston today.

“The forward estimates are reducing the expenditure of Tourism Tasmania this year and next year,” he said.

“This has to be arrested; the Government has to invest in this industry.”

Mr Currant said unless the State Government increased funding for the state’s peak tourism marketing body, there would be job losses in the industry.

He said this was despite the fact that Tasmania had a strong tourism product, as shown by five wins at the Australian Tourism Awards earlier this year.

“(The tourism industry) offers the answer for our state,” he said.

“We’ve got a natural asset here that everyone wants. We’ve got to tell people about it.”

But the state’s share of the national domestic tourism market was slipping.

Despite this, Mr Currant said operators should be “optimistic” about the future and invest in ways to improve the state’s tourism product.

Business futurist Morris Miselowski was the keynote speaker at the conference this morning.

He urged operators to harness the benefits of social media for their businesses.

Mr Miselowski said it was not enough for operators to rely solely on the marketing initiatives of Tourism Tasmania.

He said operators need to embrace new technologies and have a presence on social media sites such as Facebook, Pintrest and Tumblr.

“People have to be responsible for their own business and look at it as part of their own marketing activities,” Mr Martin said.

“It’s no different from the past where you look at buying an advertisement or paying for marketing information in a booklet.”

He said workshops at the conference aimed to lift the skills of operators across the industry. 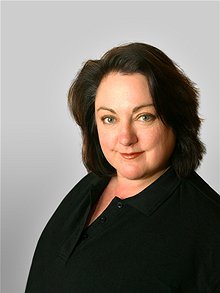 The year 2100 is 88 years away and just as close as the year 1922. How far have we come in the last 88 years and how far might we travel in the next, that’s the discussion I had this morning with Belinda King of ABC Radio Northern Tasmania.

In 2100 we are projected to have a world population of between 10 billion and 15.9 billion people (United Nations projections).

How will we feed, water, clothe and house this huge population?

What will medicine offer us? Will we have tamed cancers, Alzheimer’s, MS?

Will we be routinely printing (aka bioprinting) spare body parts for ourselves?

So many questions raised, some hypothesis made, but what do you think the world will be like 88 years from now?

Have a listen now and let me know your predictions.

Tourism needs to be more Social

If you’re going to ask me what the tourism industry needs to do to keep improving, then part of the answer has to be to get more social.

At this week’s Tasmanian Tourism conference I outlined that one of the most important things tourism operators can do to remain relevant into the future is to tear down their physical walls and thinking and embrace the virtual world.

If we remain too fixated on our physical product, offering, venue or experience then we are missing a large chunk of an increasing number of tourists needs and that is a combined physical and digital experience.

Take a look at ABC TV interview above to hear more.

The world according to you

This morning 2UE’s John Stanley and I chatted about the Future starting with a quick look at the changing workplace before getting quickly sidetracked into a discussion of our mobile phones becoming our very own  personal assistant and showing us the world as we want to see it.

TASMANIA’S tourism industry is wrong to peg its hopes on Chinese travellers and our wilderness appeal, says a leading futurist.

Business forecaster Morris Miselowski has cautioned tourism officials against putting “all their eggs in one basket”.

Mr Miselowski will be the guest speaker at an industry conference in Launceston next week, organised by the Tourism Industry Council of Tasmania.

However, Mr Miselowski said this was a concern.

“I am never comfortable when we sit here and wait for one group to be the panacea of all of our ills,” he said.

“It just can’t be. We have to market for them and do work to entice them, but we also have to work in other markets as well.”

Mr Miselowski said catering heavily for a leading audience had backfired on other destinations in the past.

“The Japanese market was a huge boost for the Gold Coast, but a lot of people did not foresee that they would come and then eventually move on to another experience,” he said.

“Let’s not put all of our eggs in one basket.”

Mr Miselowski was equally concerned about the industry’s focus on promoting its wilderness attributes.

“My concern is that I’m not seeing great growth out of it. It’s becoming the same product repackaged,” he said.

“At some point it is going to become stale.”

I recently had the privilege of presenting the keynote opening at Tasmania’s Farmers and Graziers Association conference, at which I challenged them to innovate beyond the physical land and ponder how they can use their wisdom and talent in other farm related endeavours.

Southern Cross News picked up on one of these ideas – Vertical Farming – and ran with it in their news bulletin.

whilst the Examiner ran this story in the their paper the next morning: 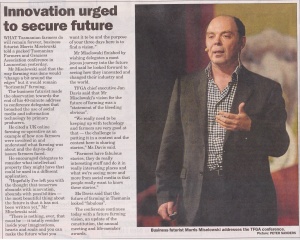 Sunrise on the Future of Education

Children’s education is THE most important issue we have at hand.

If we are going to innovate, if we are going to solve and resolve the world’s issues, cure illnesses and ensure our survival, we have to be willing to invest in those that will make it happen – our children and their education.

This morning on Channel 7’s Sunrise program we started the debate on what education must do, offer and be, so have a watch and let me know your thoughts: 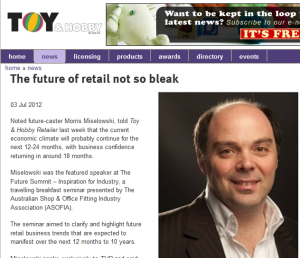 Excerpt from an interview I gave to Toy and Hobby magazine during my recent Future of Retail tour round Australia:

Noted future-caster Morris Miselowski, told Toy & Hobby Retailer last week that the current economic climate will probably continue for the next 12-24 months, with business confidence returning in around 18 months.

Miselowski was the featured speaker at The Future Summit – Inspiration for Industry, a travelling breakfast seminar presented by The Australian Shop & Office Fitting Industry Association (ASOFIA).

The seminar aimed to clarify and highlight future retail business trends that are expected to manifest over the next 12 months to 10 years.

Miselowski spoke exclusively to THR and said that retailers should look to inject theatre into their stores and the consumer’s shopping experience.

“Strangely enough customers are not looking to purchase the end item – that’s a given they know they’re going to come home with that item – what shoppers around the world want is an experience. They want theatre, to be taken out of their everyday lives and enter a different environment which will entertain them, and yes, the end result might be a purchase,” he said.

“If the toy and hobby industry can’t inject some theatre into the retail space, what chance does anyone else have?”

According to IBIS World figures presented by Miselowski, in the 2010-2011 financial year, $121 billion were spent in physical retail; online retail accounted for $10 billion.

“The most significant figure I have read during the past few weeks suggests that online retail will only account for 20 per cent of the total retail marketplace by 2015.”

“At no stage have I ever read or been told by anyone around the world that physical bricks-and-mortar retail will disappear as a result of on-line retail. What we have now is an augmentation to the way we shop. The two are not mutually exclusive; they are more like kissing-cousins. It is another opportunity to engage with a retailer.”

Miselowski also contends that the days of “price-driven, deeply discounted, offensive type of retail” are coming to an end “in around 6-12 months from now” and that “some newer sites will come to the fore and compete on a different basis.”